Starting an electric guitar construction is easy, compared to the rest of the process. The first thing to initially think of is the bridge in the case of buying it from a supplier. Usual bridges don’t allow adjusting the string distance, meaning there is an important dimension that affects your fingerboard dimensions at least. For the PRS style guitar shown on this website, an ABM 3022 wraparound bridge will be used. This bridge has a 10” radius for the string layers – equal to the PRS fingerboard radius. The main distance from the first to the sixth string is 52mm. Also the height of the bridge is very important, especially for a PRS violin shape, because it affects our neck angle. 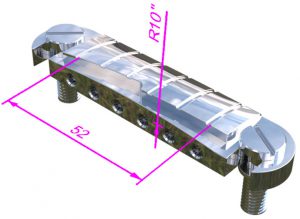 The first construction step is our fingerboard’s top view. PRS mostly uses a scale of 25”, which will be inherited for this project. This value affects the length of our fretboard, also the fretwire and inlay position and it is the second value, next to the string distance.

Normally, when building a guitar by hand, the fret position can be calculated by a simple formula:

Each half tone step is the twelfth root of two combined with the distance from each fret to the bridge. The 12th fret measures exactly half of the main distance from saddle to Bridge.

This website (Impressum) uses cookies to improve your experience. We'll assume you're ok with this, but you can opt-out if you wish.

Any cookies that may not be particularly necessary for the website to function and is used specifically to collect user personal data via analytics, ads, other embedded contents are termed as non-necessary cookies. It is mandatory to procure user consent prior to running these cookies on your website.